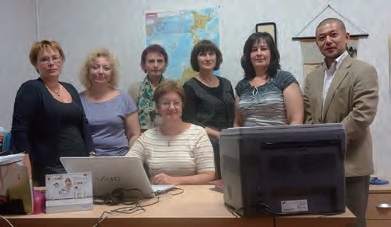 International cooperation and an exchange of experience are very important in mitigation of consequences of serious natural and technogenic accidents.

consequence of the Chernobyl accident in Belarus, Ukraine and the Russian Federation is dramatic increase in the incidence of thyroid cancer in individuals exposed to ionizing radiation in childhood.

However, in beginning of nineties in Belarus there were not enough specialists in the field of radiation medicine, in early diagnosis of thyroid cancer. Belarusian scientists and doctors needed the assistance of more experienced professionals. The ones who first gave their hand of help were Professor Yamashita and his colleagues. He came in Belarus and visited most contaminated areas. He personally evaluated the situation and suggested the most effective actions for mitigation of medical consequents of Chernobyl accident.

The most important screening study started in Belarus in 1990 under supervision of Prof. Yamashita in the framework of the Chernobyl-Sasakawa Medical Cooperation Project. The project was formed on the basis of the experiences of investigation of atomic bomb survivors in Nagasaki. Under this project more than 19,000 children were examined in Gomel region; thyroid nodules and carcinoma were detected with a prevalence of 1.7% and 0.2% respectively. By contrast, only 2 cases of thyroid carcinoma among 13,868 children (0.008%) were registered in Mogilev region, contaminated not much less than Gomel region.

Nagasaki University has been paying a lot of attention for international educational programs. In Belarus, many scientists and doctors were given chances to be trained in the Programmes of Nagasaki Association for Hibakushas’ Medical Care (NASHIM) and significantly expand their knowledge on radiation medicine. Under the supervision of prof. Yamashita worked international groups of young scientists, which were very productive in developing new research directions. One of such international scientific team, which was formed partly through coordination by the Nagasaki Univ.’ s representative office in Minsk, included Belarusian scientists who provided evidence for genetic predisposition to papillary thyroid carcinoma both in irradiated and non-irradiated populations. Recent study of our joint efforts demonstrated that the FOXE1 locus is a major genetic determinant for radiation-related thyroid carcinoma in Chernobyl [Takahashi M. et al, Hum Mol Genet, 2010 Jun 15].

I was also honored to participate in scientific conferences held in Fukushima for the past 2 years by invitation from Prof. Yamashita. The latest conference I attended was the one held last November “Radiation, Health, and Society: Post-Fukushima Implications for Health Professional Education” co-sponsored by IAEA and Fukushima Medical University. It was a great opportunity, especially for students of FMU to understand diversity of viewpoints and opinions held by specialists from various backgrounds in a great attempt to find joint solutions in the extremely tough situation of aftermath of Fukushima Daiichi NPP accident. We hope that cooperation between Belarusian and Japanese scientists will continue to grow and benefit the world of science.